At the end of the financial year, while many people take a break and re-gather their energy for the rest of the year, we are very proud of the fact our members sold $40.76 billion in unconditional sales in 2018-19. What an incredible effort in often trying times.

In June alone, we traded $3.46 billion in property sales across our networks, with outstanding results in New Zealand, Indonesia and our commercial team too. 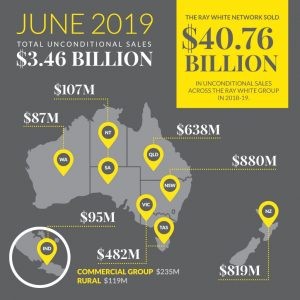 It feels like we are emerging from the two year easing in the cycle in many Australasian markets, particularly given the recent lift in auction activity, big crowd numbers at open homes and general feedback from our members.

The June housing market results show early signs that lower mortgage rates and improved sentiment are already having a flow-on effect for conditions in Sydney and Melbourne, while most other regions of Australia continue to show relatively soft housing market outcomes.

We are unsure if the recent spike in sales will form a base for the market given we are still trading on thin volume. But like all good recoveries, they always start with limited stock and then vendors begin to have the confidence again to list and sell their properties in solid numbers again.

No doubt the second consecutive rate cut in as many months shocked some people as the Reserve Bank tries to inject some life into the economy as it worries about the high unemployment rate. Along with the recent Federal Election result, APRA’s policy changes and improved auction activity, this decision gives more confidence to buyers to enter the market knowing key downside risks have been mitigated.

Our vendors who had the courage to list a mid-winter auction campaign have been richly rewarded particularly in many parts of Sydney, Melbourne and south-east Queensland from the reports emerging of competitive bidding and big results over reserves. In the month of June, we conducted 1,298 auctions and some 48,542 people attended our auctions in total. Registered bidders was steady at 3.1 people per property. Melbourne agents cleared 62 percent of their auction stock that month, while in Sydney 59 percent cleared under the hammer.  I urge you again to seek help or training from us at Corporate if you are not confident about converting private treaty sales to auction or booking auctions only. At the end of June, our Apartment Collective auction events – coordinated by Ben Burling in our Melbourne corporate team – cleared $6 million worth of stock across 12 properties from Auckland to Brisbane.

The commercial team has a strong end to the year with many big deals brokers in Special Projects and across Melbourne. Congratulations to Ray White’s Tony and Adam Grbcic of Broadbeach who also negotiated the $20 million sales of the retail asset Lakeview Retail Centre for developer Sunland Group. A local investor group bought the 3864sqm property in Mermaid Waters, beating strong competition.

We maintain our relentless pursuit for customer satisfaction and our network sent  8896 surveys in June. We received a response rate from 35% and our NPS score sits at a very high 81. For the whole year to June, we sent almost 100,000 surveys and received a response from 37% of them and our NPS finished 2018-19 at 79. A shoutout to Ray White Remuera who sent more surveys and received than any other office for June, likewise Ray White Toowoomba and Ray White Mooloolaba who received very high numbers of 10 out of 10s. Jake Battenally of Ray White Canberra also had a standout year for his high level of customer service in the Canberra community. 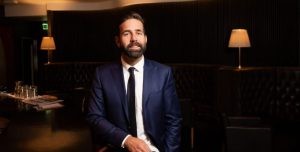 WHO FIXES THAT? A GUIDE TO RENTAL PROPERTY REPAIRS FOR LANDLORDS

Back to all news
Up to Date